In the House Concert

4.00pm
Tickets £16 – book on Eventbrite
All under 12s free entry to all concerts over the weekend.

Twenty one years and still growing… The release of the tenth album from Lunasa, the traditional music band from Ireland that have established themselves as one of the most exciting and revered bands playing Irish music today, marked a new milestone.  Entitled ‘Cas,’ which is the Gaelic word for Turn, the new CD marks a departure for the band that the New York Times claimed was “the hottest Irish acoustic group on the planet”.  Cas feature vocals for the first time on a Lunasa recording and the band assembled an enviable collection of friends to call on to guest on Cas – among them, Natalie Merchant, Tim O’Brien, Daoiri Farrell and Mary Chapin Carpenter.

Lúnasa delivers music with a passion that informs every note and continues to define and redefine the genre. Their innovative arrangements and unique approach to the music create a singular sound that has propelled Irish acoustic music from familiar ground into surprising and exciting new territory.

“Lúnasa is a very different Irish band in many ways,” explains Cillian Vallely, who plays uilleann pipes and whistle in the line-up. “It’s essentially an all-instrumental band. We have a double bass. We play a very diverse selection of music, including our own compositions, melodies from other Celtic regions such as Brittany, Galicia, Asturias, and Scotland, and slower melodies, often involving three-part harmonies. The melodies are played on the traditional instruments of pipes, fiddle and flute, but the rhythmic and harmonic style—the bass and guitar style—give the band a very contemporary sound.”

It’s a sound that moves beyond the long established boundaries of traditional music, and it has earned the group a following that encompasses music fans of all ages and tastes around the world. Lúnasa is also a collective that courts opportunities to grow and change, to try something different. With nine albums already in its discography, as well as solo CDs and recording and performing credits with many of Ireland’s and the world’s most well known talents, the quintet are excited by the new direction signalled by Cas. 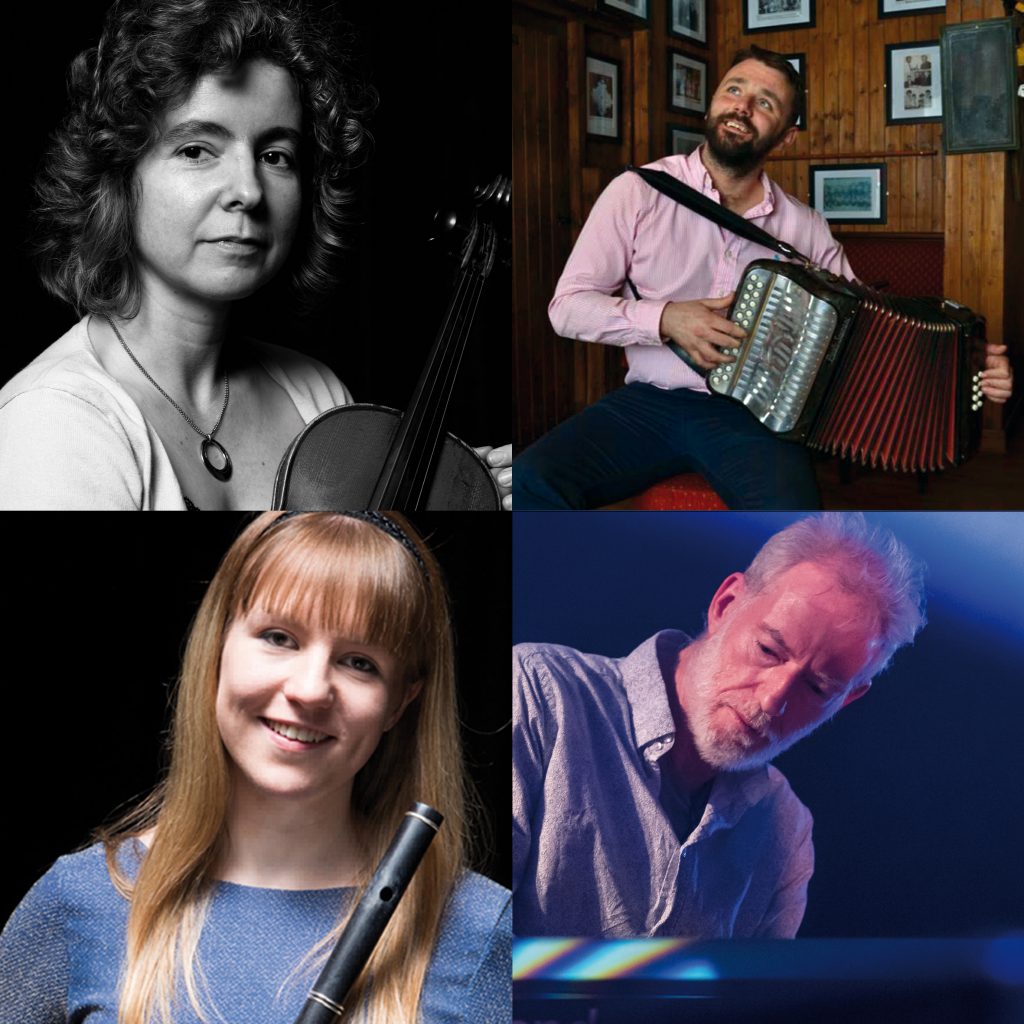 Bríd, from Castlefinn, Co. Donegal now lives near Dungannon, Co. Tyrone. She won numerous under-age All Ireland titles and other prestigious fiddle awards including the Senior All Ireland, Oireachtas na Gaeilge and Fiddler of Dooney.

Bríd an MA graduate of the Irish World Academy of Music & Dance at University of Limerick has toured extensively. She has been hailed as one of the leading exponents of traditional fiddle playing of our time. Bríd is highly respected as a teacher and has tutored at many Summer Schools and Workshops throughout Ireland and in France, Holland and the USA. Her first solo CD was released in 2015 and has enjoyed much success to date.

Órlaith McAuliffe, the TG4 Young Traditional Musician of the Year, is a London-born (to Kerry parents) flute and whistle player who lists among her broad church of influences Matt Molloy, Kevin Crawford, Louise Mulcahy, Catherine McEvoy and Séamus Tansey. But it’s in the marriage of flute and whistle styles that McAuliffe has established herself as a true original, both as a player and a composer.

This flute and whistle player is already a much-talked-about performer for her accomplished, energetic, technically faultless and whole-hearted playing.

From Brookeborough Co. Fermanagh Brian started playing music at 5 years, starting on accordion and piano, and progressing to banjo in his teenage years. Brian has played in many bands and groups including; Dervish, Four men and a Dog, The Sean Keane Band, and At the Racket. He currently plays in De Danann and has played on over 200 albums to date, and is now a very much sought after accompanist and soloist. Brian also travels the world giving workshops and masterclasses. 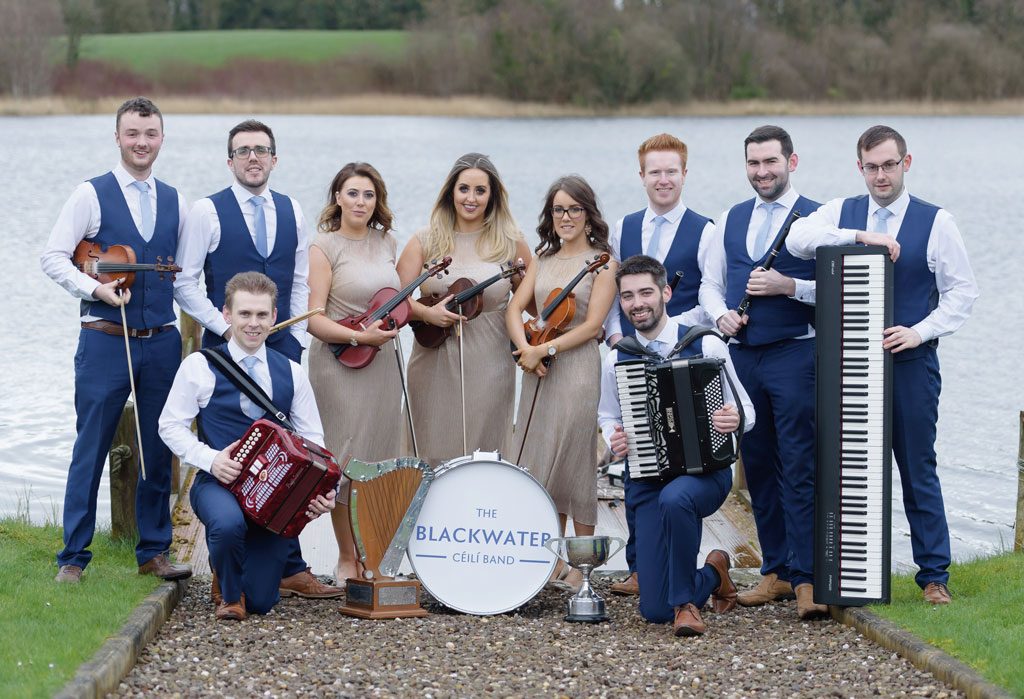 The Blackwater Céilí Band hails from the Clogher Valley region of County Tyrone, taking its name from the River Blackwater, which flows through the heart of South Ulster. The band was formed in February 2015 and consists of musicians from counties Tyrone, Monaghan, Down and Leitrim. They have become a well known and established band in the area and further afield over the past number of years, playing at various concerts, fleadhanna and céilís. Their music is firmly grounded in the Ulster tradition, and they strive to produce a lively and rhythmical style of céilí band music, suitable for dancers and listeners alike.

Since their formation, the band have competed every year at All Ireland level until 2018, when the band made history and became the first Céilí Band from County Tyrone to be crowned All Ireland Senior Céilí Band champions at Fleadh Cheoil na hÉireann in Drogheda. This success has resulted in many noteworthy TV and radio appearances for the Blackwater, including two live TV performances on TG4’s Fleadh TV from both the Ulster and All Ireland Fleadhanna, RTÉ’s Fleadh Cheoil programme, a broadcast recording on RTÉ Radio One’s Céilí House, and a special appearance on RTÉ’s Up For The Match in September 2018. The band have also successfully released their debut album, Music in the Valley, this summer.