Saturday 4th August – 8.30pm
Tickets £15 – book on Eventbrite
All under 12s free entry to all concerts over the weekend. 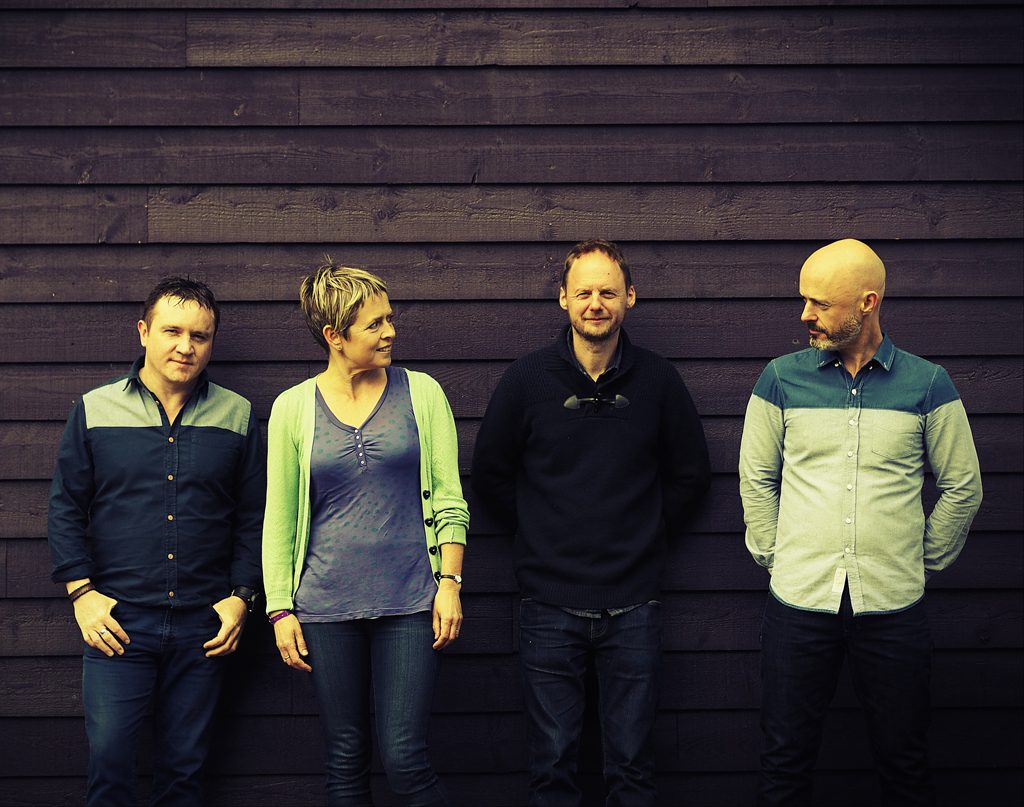 The flutes of Brian Finnegan and Sarah Allen, the guitar of Ed Boyd and the bodhran of John Joe Kelly weave and spin traditionally rooted tunes into the breathtaking sound of the groundbreaking band Flook. This group possesses a rare blend of fiery technical brilliance, delicate ensemble interaction and a bold, adventurous musical imagination.

Though their first release, Flook! Live! (1997), was already heralded as “the ultimate modern flute album” by The Irish Times, Flook only properly burst onto the international music scene with the release of their debut studio album, “Flatfish”, in 1999. This album introduced master bodhran player John Joe Kelly to Flook’s line up of flutists Brian Finnegan and Sarah Allen and guitarist Ed Boyd. Flatfish was hailed as “stunning”, “remarkable” and “little short of miraculous”, but it was Flook’s live performances that really captured the hearts of those who watched and listened; the rapport between these four musicians, the sheer enjoyment they developed in playing together, was commented on by audiences and critics alike. “Rubai”, released in 2002 and nominated for BBC Folk Album of the Year, was universally applauded by both journalists and fellow musicians and cemented Flook’s reputation as one of the most exciting and innovative bands to emerge from the English/Irish folk scene, and they went on to win the coveted award for Best Group at BBC Folk Awards 2006.

There is no shortage of virtuosity amongst the members of Flook, but the unique impact of this band stems from the wholly intuitive, almost symbiotic, exchange between the various flutes, frets and skins. Flook announced that they were taking a prolonged pause from live performance at the end of 2008, but, due to overwhelming popular demand, they’re now back playing live and firing explosively on all four cylinders.

“In the pantheon of Irish/English folk groups they don’t come much more revered than Flook.” – Irish Post

“In the US, their reputation borders on the Messianic …” – Irish Music Magazine

“Head and shoulders above the rest… Magnificent” – The Irish Times

“A sensational live act…. in the front rank of the innovators” – The Rough Guide to Irish Music

“Sheer musical magic…Stunning technique, impossibly agile rhythm work and virtuoso flights of jazzy improvisation add up to one of the most enthralling sounds around.” – The Scotsman

“Never have I seen so many people so completely and utterly spellbound…the most magical of experiences.” – The Irish Post

“In the pantheon of Irish/English folk groups they don’t come much more revered than Flook.” – Irish Post 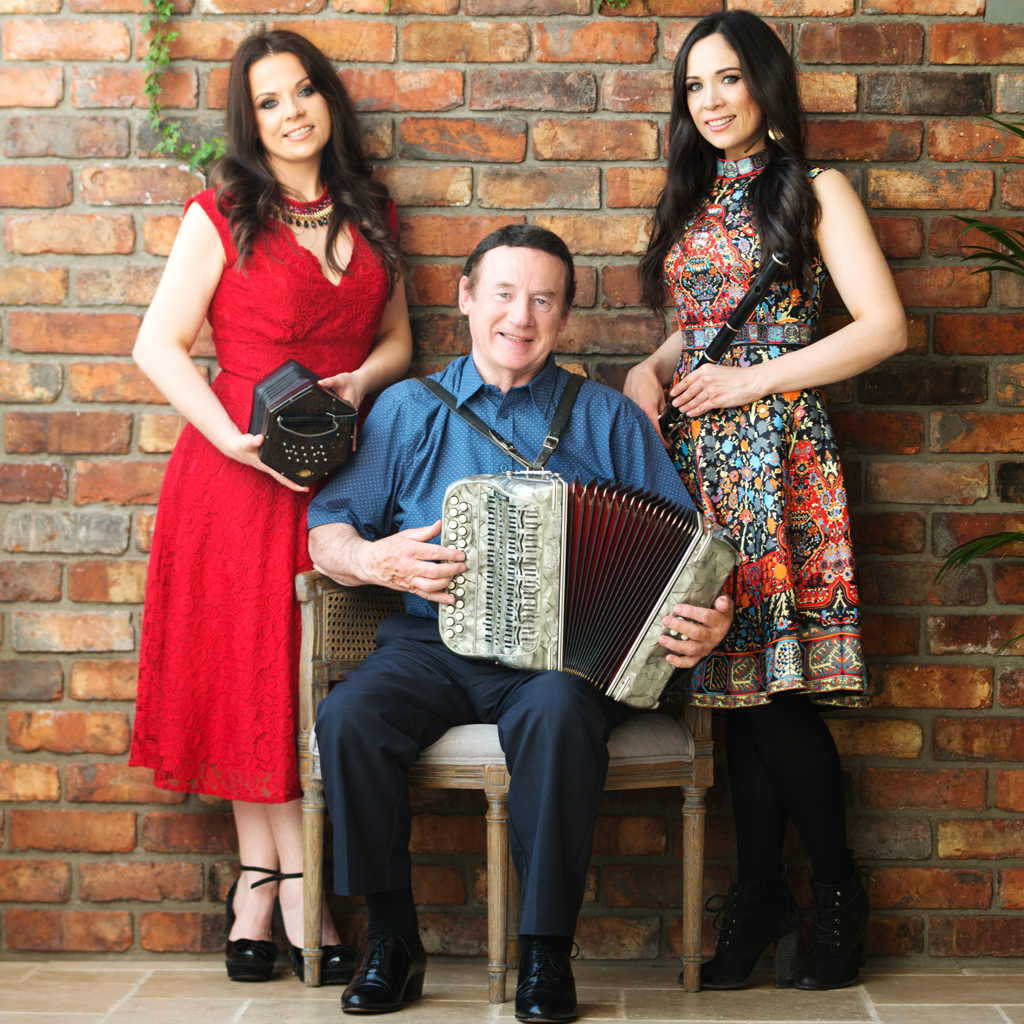 Musical families are often the backbone of multi-generational continuity within that global community, and no musical family today is more impressive in upholding the best principles of the tradition than the Mulcahy’s of Abbeyfeale, West Limerick. Mick, Louise and Michelle Mulcahy play a dazzling array of instruments between them but it’s the sweetness and tunefulness of their ensemble playing that is most striking. They have an unmistakable, infectious sound and their skill and enthusiasm comes from a lifetime of playing together. Their latest family album ‘The Reel Note’ has received worldwide acclaim and was awarded, ‘Album of the Year’ by Tradconnect in 2017.

Mick Mulcahy is a living legend in Irish accordion playing, with a rare repertoire of old tunes which he plays in a highly distinctive style, a style of personal touch which distinguishes the work of the true traditional musician, a touch which has been passed down to his two daughters Louise and Michelle. Previous albums from the family include, ‘The Mulcahy Family’ recorded with the American Label Shanachie, ‘Notes From The Heart’ and ‘Reelin’ in Tradition’ which were recorded with Cló Iar-Chonnacht.

Mick, Louise and Michelle have also recorded individual solo albums titled ‘Mick Mulcahy’, ‘Tuning the Road’ and ‘Suaimhneas’. The family has made a regular appearance in the top ten traditional albums charts in the United States, Ireland and the U.K. As a family they have toured extensively throughout Europe, America, Asia, New Zealand and Australia. The family has also featured on many television and radio programmes both in Ireland and around the world. Louise and Michelle were recently voted ‘Female Musicians of the Year’ at the Live Ireland Music Awards 2017. Mick was awarded the Bardic Award at Fleadh Cheoil na hÉireann in 2017. Michelle was awarded Tg4 Ceoltóir Óg na Bliana in 2006.

“If you like the ‘pure drop’, here it is – traditional Irish music at its natural, unadulterated and most seductive best” – The Irish Times